This is Infinity (Zenki, Part 3)

I always find this next line of Zenki a little bit startling, just because it’s so straightforward. “Life is just like riding a boat”—not a box of chocolates, but it sounds simple in that same way, at least at first.

Life is just like riding in a boat. You raise the sails and you row with the oar. Although you row, the boat gives you a ride and without the boat no one could ride. But you ride in the boat and your riding makes the boat what it is.

It would be easy to misunderstand what Dogen is saying here about the nature of things. He’s not suggesting that the boat has an inherent boatness and that it’s waiting for you so that it can be fulfilled. We need to be clear: if you never ride that boat, the boat is fine. If it’s tied to a dock, then it’s floating in the water and it lives in relationship to that water, and if it’s on land, then it sits on land and in that moment it lives in relationship to that land. But when you ride in the boat, then you see that the boat is living in relationship to you. That, in that moment, is what we would call a “boat,” something that carries you across water. 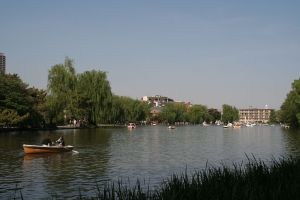 Dogen writes, “Investigate a moment such as this.” Dogen happens to like this example of a boat—this isn’t the only instance of it—but we could choose anything to illustrate the same point. “Investigate a moment such as this. At just such a moment, there is nothing but the world of the boat. The sky, the water, and the shore all are the boat’s moment, which is not the same as a moment that is not the boat’s.” This is important. If there is no boat, that doesn’t mean that something is lacking. But it does mean that this moment cannot happen. A different moment must happen instead.

Sesshin is like this. If I ask, “What is sesshin?” I might hear all sorts of wonderful answers. It’s a schedule, for example, or it’s this traditional thing, or it’s a meditation retreat, or it’s torture. But those are just ideas. None of those things can be located in practical terms. A sesshin is a building, it’s a floor, it’s the people in the room. It’s the food, the air. It’s a living thing that is that particular sesshin, and if one person escapes in the night—I shouldn’t say escapes, leaves—then the sesshin is not over. But that sesshin is over. It’s not the same sesshin. Wherever you are, whoever you’re with, you are the blood and the organs of the body of this moment, and while you are here, you are absolutely vital, and when you go, then we’re in a different moment in which everything remains vital but now everything is different. 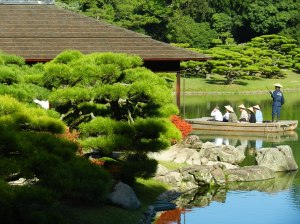 It’s easy to read this text multiple times without seeing what’s happening: at no point in this analogy is he talking about me. He’s talking about the boat. He’s talking about the activity of the boat. I imagine it as a photograph, and it’s beautiful. There’s a human being rowing a boat across the water from shore to shore, and there is earth and sky, and there’s water, and the caption reads, “The boat’s moment.” That caption is the punchline, because any picture involving a person must be the story about the person. (We can tell the story that way, too, of course, and it’s equally true. The boat is actualizing you. Earth and sky are the undivided activity of you, and this is your moment, but if we see it that way from the beginning, we might just reinforce what we already think, which is that my moment is somehow separate from someone else’s or something else’s.) It’s a different way of looking at the world.

And as we notice this, I think we begin to develop what some might consider to be a very strange sense of gratitude toward the things around us, so that when we step outside and we see the sky, we understand that we could not be here without it. When we walk, with every step we can grab the floor and we can appreciate the fact that it’s there—not because it’s a special floor, and not in the way that we’re taught when we’re kids, where somebody says, “Eat all your vegetables because someone in Africa doesn’t have enough to eat.” This is not comparative. It’s not about someone else not having a floor. We don’t touch down on this floor and think, well, I’m grateful for this one because at least it’s not something else. At least I’m indoors, or at least it’s not stone, or at least it’s clean. It’s simpler than that—without it, we would have nothing to stand on. It seems almost absurd to say it, and yet it falls into the category of things that are so obvious that we might not notice them once in our entire lives.

Koun Franz was born in Helena, Montana, but has spent more than half of his adult life in Japan. He was ordained in 2001, then trained at Zuioji and Shogoji monasteries. From 2006 to 2010, he served as resident priest of the Anchorage Zen Community in Alaska. Koun and his family now live in Canada (Halifax, Nova Scotia), where he leads practice at Zen Nova Scotia.